The rally last Saturday in Washington was postponed for an hour while President Trump prepared to board a helicopter on his way to a football game. Vapers waited patiently across the street near the Washington Monument.

When Trump took off, he flew right over the vapers, who had come from all over the country to meet in his backyard and warn that he should fear their political strength—especially in battleground states he barely won last time around. Jon Glauser of Demand Vape grabbed a shot of the crowd holding their signs to the sky as the helicopter passed.

Glauser’s image seemed to capture the spirit and themes of the day. There were other great pictures too. This article is illustrated with shots taken and sent to us by vapers who were there. 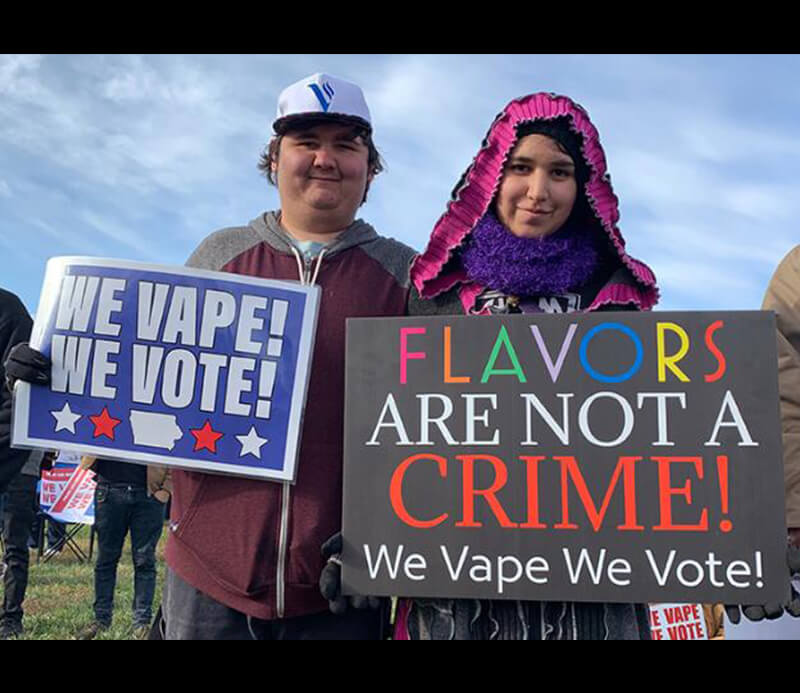 The timing of the rally was perfect. The previous Friday, Nov. 1, reports circulated that the administration was ready to ban flavors. Then, last Monday night, the White House Office of Management and Budget (OMB) cancelled all remaining meetings with stakeholders—signalling that new FDA guidance restricting flavored vaping products would be finalized and announced very soon.

On Tuesday, vaping advocates grabbed their phones—first to call the White House, then to swarm the administration on social media with heartfelt pleas and angry warnings. “We have votes that you need” was the message. By last Friday, the day before the rally, Trump seemed to have shifted his position. In September, he had promised a flavor ban, but now he was waffling, talking about jobs and putting off any news till next week.

“We have a lot of people to look at, including jobs, frankly, because you know it’s become a pretty big industry,” he said. “But we’re going to take care of…now there’s also…when you mention vaping you’re talking about e-cigarettes, you’re talking about a lot of different things. But we’re coming out with a big paper next week.” 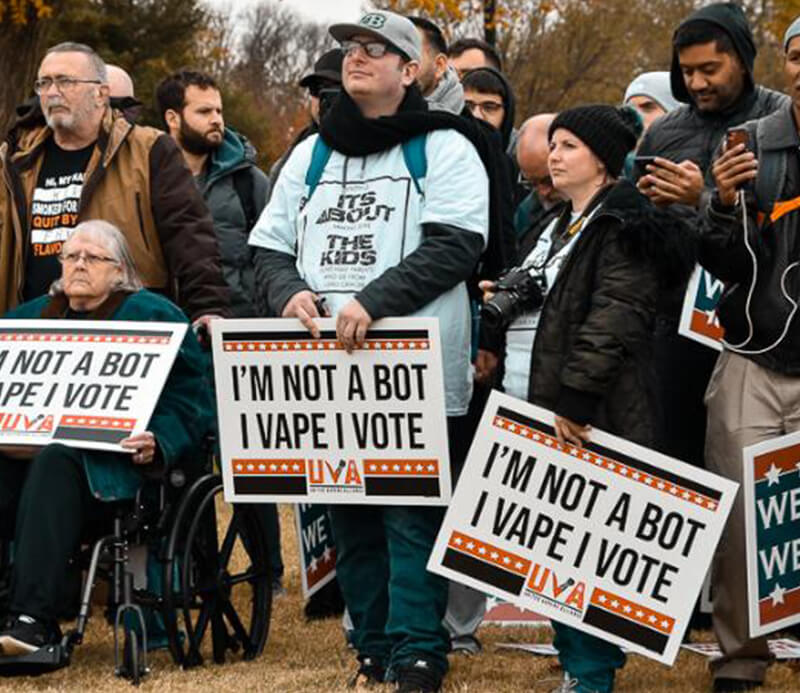 By the time the crowd gathered at noon Saturday, they were feeling strong—but still uncertain about the future. Like crowds at every vaping event ever, the rally goers were happy to be spending a day with other vapers. But this time seemed special.

“Hold on a second, I want to take a picture with this amazing crowd,” said Amanda Wheeler, co-owner of JVapes, who is also an officer in two state trade associations. Her speech finished, she took a selfie from the stage with the crowd cheering behind her. Her smile was huge.

The crowd was amazing, no matter how many people were there. Estimates ranged from hundreds in some mainstream news accounts to several thousand. It seems likely that there were more than 2,000, and possibly considerably more. But who cares?

For every vaper who was there, thousands more who couldn’t make it were watching on YouTube and Facebook streams, using the Twitter hashtag #VapeRallyDC2019, or sharing images from the rally on Instagram. Every vaper will be equally important keeping the pressure on the Trump administration to listen and act fairly.

The United Vapers Alliance organizers did a spectacular job. There were no glitches, unless you count the Secret Service postponing the rally for an hour, which wasn’t the UVA’s fault. The speakers were great, and it was exciting to see the “vape famous” participants like Nick Green and Greg Conley, but the real star was the crowd.

For maybe the first time, ordinary vapers were filled with a sense of their own power. Standing next to the President’s home, they were demanding to be heard and recognized.

“We vape! We vote!” they shouted over and over, and somebody must have heard the message, because Monday morning President Trump had a message for vapers.

No one knows for sure what will happen next, but vapers on Twitter started pushing the White House to include consumer advocates and independent vaping industry representatives in whatever meeting happens, and that will probably happen only with continued pressure from vapers and small businesses.

Vapers seem to be aiming in a single direction. Don’t let the momentum slip.